History of the Car 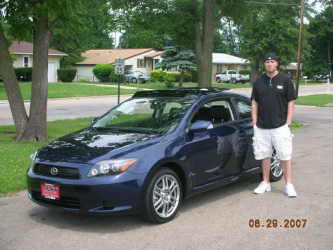 The Beginning....
This page is an overview and progression of my 2008 Scion tC. The car was purchased brand new  on June 29, 2007 from Crown Toyota Scion in Decatur, IL with only 32 miles on it. The car was specifically ordered to guarantee the 1st 2008 tC in the area to ensure getting all of the new features the 08 provided over the 05-07. After ordering the car in late may, the modding began before arriving. Audio from previously owned vehicle was pulled, new exhaust, 7" touchscreen indash ordered, a little bit of glow, and a Fujita F5 intake were in before the car. After the car was in, the parts went directly on (car was debaged before even leaving the lot or plates on the car). Within two weeks the car was already modified w/ stereo, glow, intake, exhaust, intake and air diversion panel at its first show in Kewanee, IL taking 'Best in Class' and 'Longest Distance'. After success from its first show, and meeting a few others at the show, more shows were to come along with a few other awards ending the very short 3 month season with 6 awards.

Over the next few years the car has grown going from very basic modifications to custom mods in and out of the car. This would include, paint and body work, custom stereo/interior, various engine bay modifications, suspension and wheels as well as brakes, seats and many other things. With the help from companies such as ACVMailorder.com, Kinetik Power, Corbeau Seats, TheNextLevel, R1concepts.com, and NIA AutoDesign, the tC has been able to achieve success at shows all throughout the Midwest; compiling over 65 awards and trophies. Some of these awards include Best Scion, Best 2 dr Mild at DUB Chicago 2009/2011, and Best Scion, Best 2 dr Street at DUB Memphis. The car has been all over the midwest including  as far south as Memphis, TN; up to Kaukauna,WI; shows out east in Ohio and Indiana, As far west as Cedar Rapids, IA, many shows in chicago and every place in between seeing well over 100 shows in the past few years. (DropFest, HIN, AnotherLevel, DUB, Slamology, MidwestThunder, B96 SummerBash, ect...)